The first glimmer of the Honda Hawk occurred when I met Burt Munro in 1968 on the Bonneville Salt Flats. Mickey Thompson had invited me to observe his successful attempts at setting numerous FIA land speed records with the Mach 1 Mustangs. Burt also was there and we talked for several days about his adventures as I looked over his ancient Indian streamliner. It really looked much better in the film, “World’s Fastest Indian”, than on the salt that week. 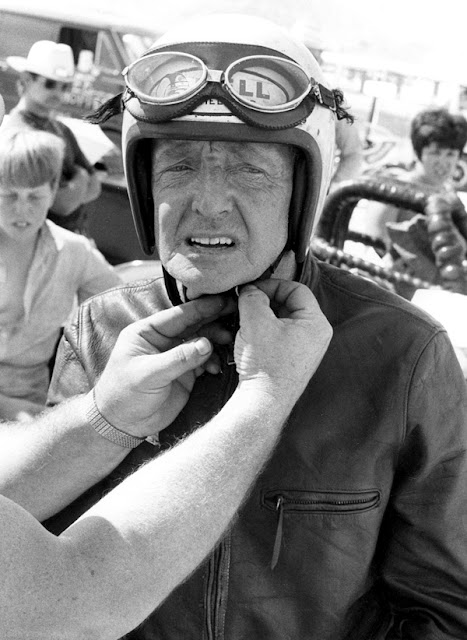 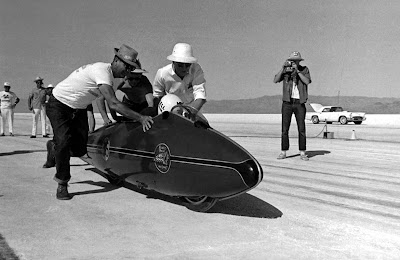 After that experience I sketched some ideas in my spare time at Reaction Dynamics with the idea of eventually building a bike around a pair of Kawasaki triples. Fascination with the motorcycle land speed record grew while on the Salt Flats in 1970, watching Don Vesco set the FIM record at 251.66 miles per hour, followed days later by Denis Manning’s Harley-Davidson, ridden by Cal Rayborn, to 254.84 miles per hour. 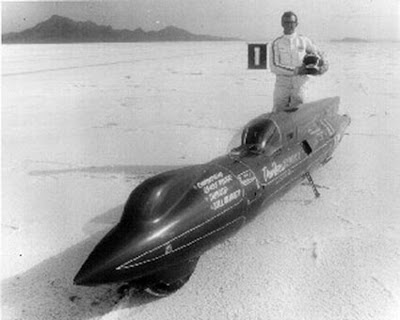 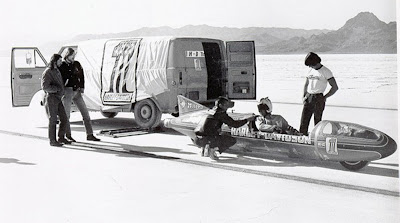 The whole Honda Hawk design and construction took place in about six months in 1971. American Honda was interested in the FIM record and asked Pete and me to build a bike to race that year. The results were a one way run in 1971 at 286.7 miles per hour and, in 1972, an AMA class record of 232.7 miles per hour. Not too shabby, eh? 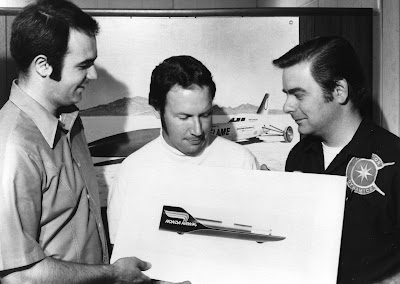 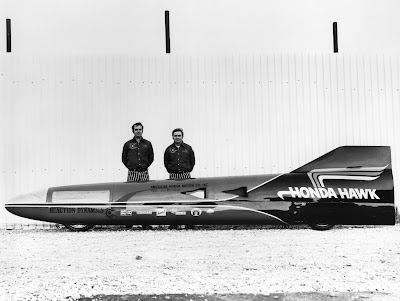 Arriving on the Salt Flats in late September, it immediately became apparent I had screwed up the steering geometry. A four bar link design was employed to try and keep the steering structure rigid at design speeds over 300 miles per hour. While the Honda Hawk did fall over a few times at low speeds, compared to Manning’s tank-slappers in 1970, it didn’t look too bad. By the time Rayborn set his record with the Harley it could have been called the Duct Tape Special. Stuff happens when you push the envelope, and if you are prudent it isn’t fatal, just a learning experience. Manning and Rayborn stuck with it and won!

After getting some bearing part numbers from Don Vesco (a really great guy) we quickly redesigned the steering using a “center-point” design. Dix Erickson hustled back to American Honda to fab the parts and we got it rolling immediately. It never fell after that in 1971.

The major problem following the handling issue concerned the condition of the race course itself. I-80 was under construction, built on a berm of earth, rocks, etc., alongside US40. During the winter of 1970-1971 debris consisting of mud and clay washed out on to the international course. When the summer wind and heat dried the Salt Flats, the debris was blown away leaving a veritable motocross surface – well, not quite, but undulations remained in the high speed sections. 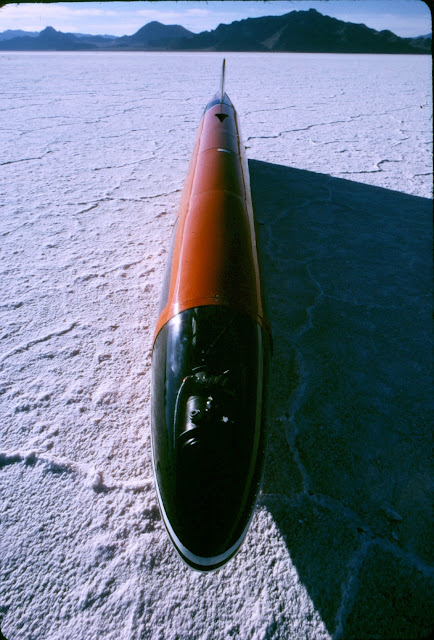 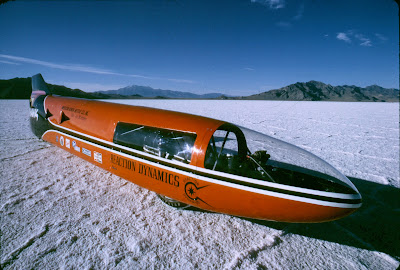 Honda Hawk had a fixed rear suspension. As a result, at high speeds the rear wheel left the ground. We continually had two modes of failure on several record attempts, both related to over-revving the motors. While the motorcycle did have a rev limiter, it didn’t work. Solid state electronics were temperature sensitive in those days. The rev limiter was calibrated in the dynamometer lab at higher temperatures than the frigid conditions in October in the high desert. The result was disastrous. 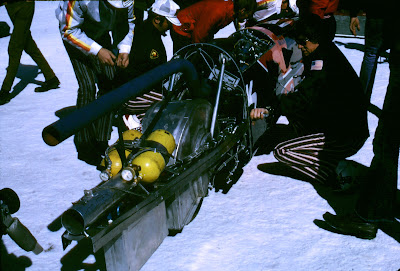 At high speeds the rear tire would unload and the motors would rev up before Jon McKibben could roll back the throttle. Several times this resulted in bent valves when they floated and hit the pistons. Other times, when the rear wheel was over-speeding in the air it came down and overloaded the drive chain which stretched or snapped. It was not possible to make the FIM-required reverse direction runs in the time available. Finally, the racing season was over. 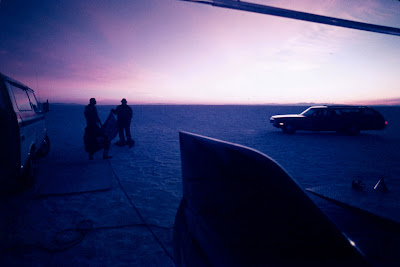 At this time American Honda took over the Honda Hawk program in Gardena. Several changes were made to the Honda Hawk’s front and rear suspension. It crashed, at speed this time, in 1972 after setting the class record – which still stands. 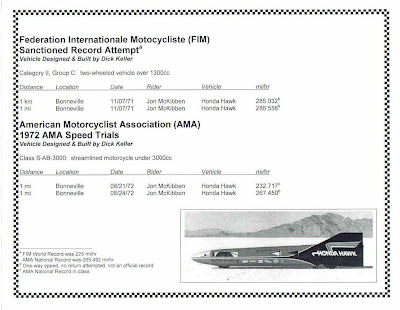 I am not embarrassed that we built a unique bike in six months that went over 30 miles per hour faster than the FIM land speed record.

Want a better story on the Honda Hawk streamliner?

It is the 28th februarry 2012, and I am checking my mailbox, and one particular e-mail interests me! The title is "Want a better story on the Honda Hawk streamliner?", send to me by someone called Richard (Dick) Keller??? 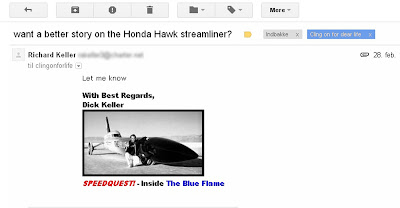 After a fast google search it looks like this "somebody" must be the Richard Keller from Reaction Dynamics, that was involved in The Blue Flame land speed record attemt in 1970!?! What is going on??? The e-mail is a reacktion to a post on COFDL that I posted exactelly a year ago to this day!

I heard of the Honda Hawk streamliner from a classic swedish motorcycle magazine, making an anniversary issue on the Honda CB750. In that magazine there was a very short story on a land speed record made with a CB750 twin engined streamliner, a story of the fastest CB750 ever, and hardly anyone has ever heard about it...? 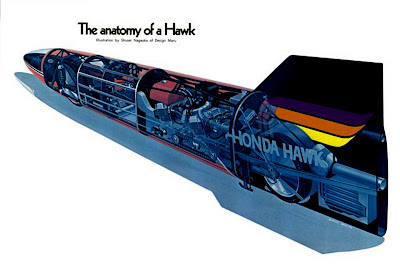 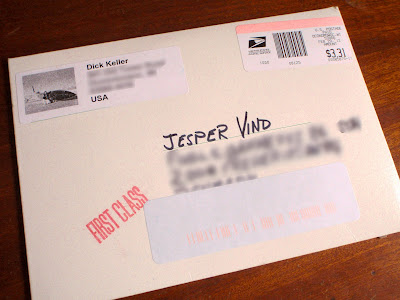