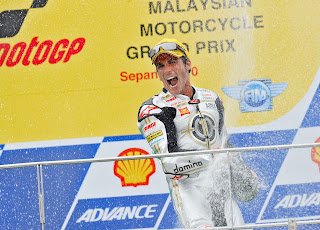 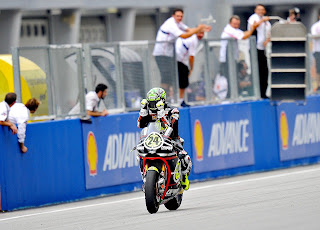 With his result of fourth place at the Malaysian Grand Prix the Spaniard sealed the Moto2 World Championship title.
Growing up in the family bike shop in Manresa as the son of a ten-times Spanish motocross champion, Toni Elías was destined for a career on two wheels.
He started the year as one of the title favourites in the Moto2 class, and throughout the season his weath of experience and race-craft has shone through as he claimed seven wins, incuding four in a row over the summer period. The Spaniard became the first ever Moto2 World Champion at the age of 27.
Indsendt af CB750 Freak! kl. 16:13 No comments: 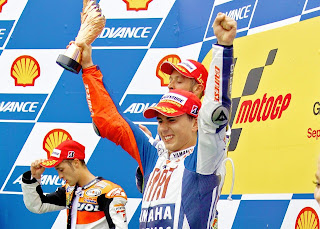 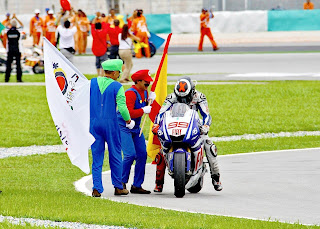 As expected a third place in the Malaysian Grand Prix secured the Fiat Yamaha rider his first ever premier class title.
Jorge Lorenzo is Spain's first MotoGP World Champion since Àlex Crivillé in 1999.
Having battled with team-mate Valentino Rossi and Honda's Andrea Dovizioso in the last knockings, the Mallorcan eventually elected to play it safe.
With Closest challenger Dani Pedrosa out of action due to a broken collorbone, Lorenzo's winning of the title ends a two-year victory streak for Rossi, who triumphed in todays race for the first time since he broke his leg.
Indsendt af CB750 Freak! kl. 16:05 No comments: