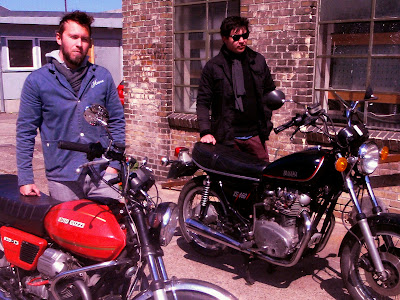 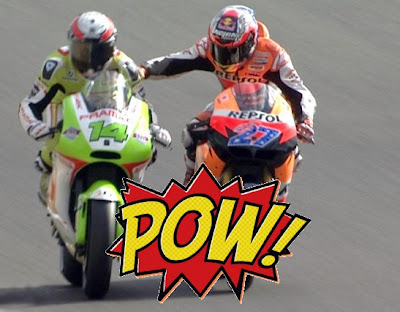 It seem like the feisty Casey Stoner can't make any friends at the padocks this seasson? First the aussie was forced off track by Valentino Rossi at the Spanish Grand Prix, and this week at the track it was Randy de Puniet who was a hurdle!
The incident happened as Randy de Puniet and Álvaro Bautista had slowed on the racing line, with Stoner rapidly approaching. With de Puniet looking back over his shoulder, the French rider seemingly moved to get out of the way of Stoner, who was on the inside of the two riders. However Randy de Puniet moved, and blocked Casey’s line, as he tried to make his pass over the slower duo.
Noticeably upset about having to slow down and being blocked on his fast lap, Stoner punched de Puniet on the shoulder. Stoner also exchanging other gestures of unsportsmanlike nature, as he seconds later passed the two riders.
Race Direction later fined Stoner €5,000 for turning MotoGP into an arena of martial arts.
Indsendt af CB750 Freak! kl. 14:52 No comments: