A New Italian Friend – The Plan B Story Continued 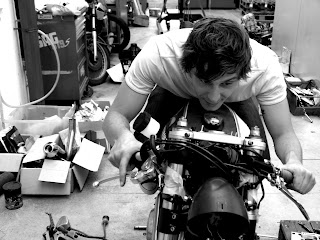 Let me introduce you all to a new friend. His name is Christian; he is Italian, and the guy behind Plan B Motorcycles.

Besides being a fan of Cling on for dear life, he is also building some really cool Café Racers, like The Sumo [1993 Honda CBR 600F], The Sonic [1938 Harley Davidson WL], and The Proto-Moto [Yamaha XT600z Tenèrè].

Plan B Motorcycles got its name because all the bikes was scheduled to be send to the junkyard, but as a Plan B they were resurrected and build into super cool Café Racers.

This was also the case with The Proto-Moto project. When Christian first found the abandoned Yamaha it was in a really bad shape! Even though he did not like the bike itself, he loved the rough muscular engine, and started modifying the bike around his own taste. The Proto-Moto is partly build using parts from other bikes, found at swap meets. But looking more carefully at the bike it is clear that a lot of craftsmanship has gone into the bike and all the hand made bits and pieces.

The brake leaver was re-build to look old, but in fact the brakes are very modern parts. The small white ring around the mounting point of the headlight is actually a hidden led-turning signal, and the carburettor covers are kitchen sink stoppers. Clever and cool design features that really make this bike into something special. Or to quote the man himself:

“For me this is the true modern Cafè Cacer: A hand made motorcycle, simple and economical, built by blending modern and classic parts. Perhaps they will not make 300km/h but they can give you a thrill way more complete than any other modern bike. [...] Moreover learning to make all the modifications and the repairs with your own hands does not have price!”

In all a very cool bike project that I personally am looking forward to see finished. 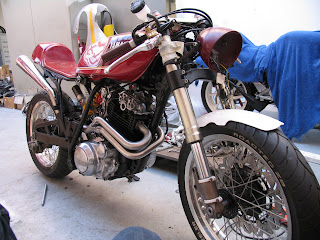 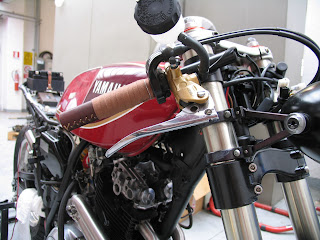 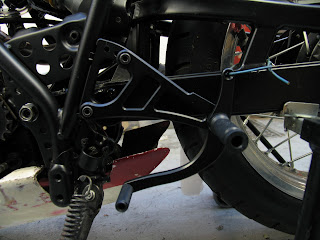 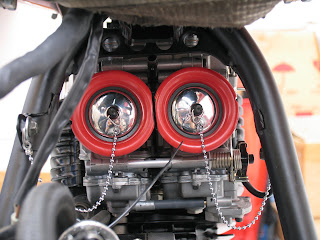