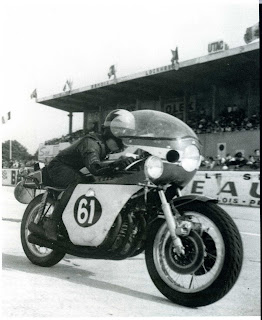 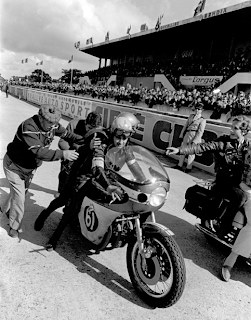 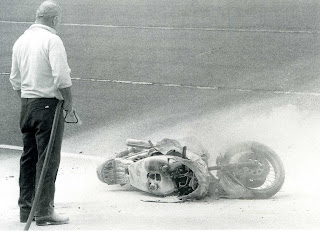 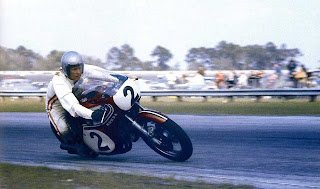 Winning the prestigious Bol d’or (Golden Bowl) in France in September 1969, gave the CB 750 another promotional boost, just when initial waves caused by its launch earlier in the year were beginning to settle. Two bikes were ridden at the Bol d’or, with hotter camshafts and special exhaust sustems. No air filters were fitted and power output was up to 72 bhp. The bikes were driven by 19 year old Michel Rougerie & Daniel Urdich.

The relatively inexperienced rider Michel Rougerie measured up to the task by winning Bol d’or with an average speed of 72 mph / 116 km/h, and completed 445 laps in the 24 hours the race was on.

Rougerie whent on to be one of France’s top racers, winning three GP races, but lost his life en a crash in Yogoslavia in 1981.

To demonstrate the capabilities of the CB 750, Honda put together a factory effort to race the bike at Daytona in 1970. Honda’s race division quickly went to work on the already capable stock CB 750, to produce a race version of the bike for the Daytona 200. It was initially referenced as the “CB750 Racing Type”. It later became known as the CR750. The factory produced four bikes for that early race effort, unfortunately Ralph Bryan crashed during practice and the bike burned dramatically due to the high amount of highly flammable magnesium used in building the racer .


On March 15, 1970, Dick Mann rode one of the factory CB750 Racing Types (against a field of Harley-Davidsons, BSAs, Triumphs, Suzukis, and Yamahas), to win the Daytona 200, and set a new track record.