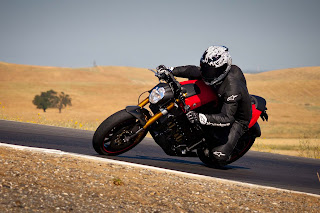 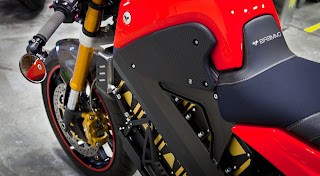 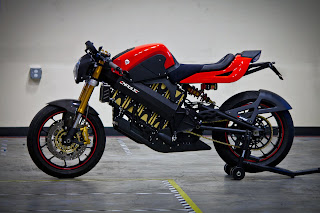 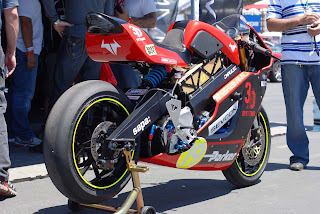 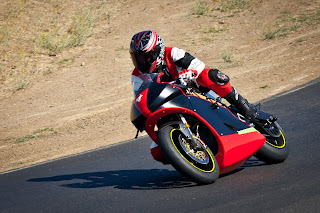 The Brammo Empulse represents the first production sportbike to be available by consumers.

The Empulse comes in three flavors (Brammo Empulse 6.0, Empulse 8.0, & Empulse 10.0) with differing amounts of on-board power each variant. While mileage will vary on actual riding conditions, the range are based on mixed use of freeway and city streets. All the Empulse models are capable of speeds in excess of 100MPH, and feature a 40hp liquid-cooled AC synchronous motor.

With the Empulse 10.0 having a 100 mile range, and costing only $13,995, Brammo is offering a potent and affordable package.
The big issue here is price/performance parity with internal combustion engines. When you consider the Ducati Streetfighter that’s currently only gets about 130 miles on a tank of gas, and costs $14,995 retail, the Empulse 10.0 becomes a vary attractive option to consumers. Obviously there are cheaper motorcycles that get better range than the Streetfighter, but the point is that for the first time, production electric motorcycles are creeping onto the performance figures of ICE motorcycles, while remaining affordable to the average consumer.
The Empulse will be sold through Best Buy, just like the Brammo Enertia, and will be available mid-2011. Orders will be served on a first-come, first-serve basis, and can be placed at brammo.com. A $99 fully-refundable deposit must be placed 90 days before delivery of the Empulse to the customer.

Designed by Brian Wiseman, Brammo’s Director of Product Development, the Brammo Empulse has a striking design that mixes bodywork that could find itself just as easily on an Italian sportbike as an American-made powercycle.
The Brammo Empulse RR entered the e-Power electric race at Laguna Seca, and was on display in pit area with a full race fairing. Brian Wismann says that fairings could be an option to Empulse owners if there’s enough interest. There is also some hinting as to the possibility of there being an Empulse spec-racing class, but we’ll have to wait and see on that development.
Indsendt af CB750 Freak! kl. 16:46