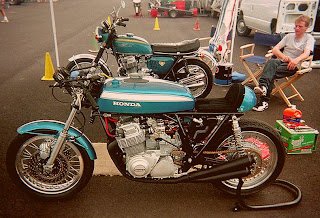 A friend of mine asked me why I put CB and CR750 in the headline of a previous thread [http://clingonforlife.blogspot.com/2010/09/cbcr750-cafe-racer-project-started.html].

The reason is actually very simple. The CB750s used for racing in the 1970’s was called CR750, and there were a number of mechanical differences between the CB & CR750.

The most striking design different between the CB & CR model is the longer and narrower fuel tank, and race tail on the CR750. Engine, brakes, exhaust and suspension looks the same, but it is not! The CR750 is a totally different beast!